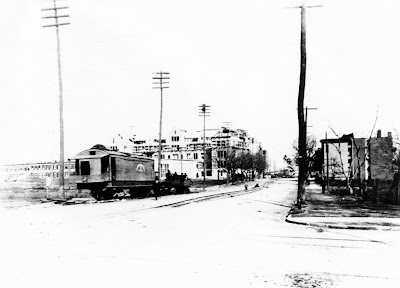 Picking up from yesterday's post, discussing the photo book " Bay Ridge" , by Peter Scarpa and Lawrence Stetler, for the Bay Ridge Historical Society, which is released this Monday...

When you first look at this photo, it doesn't seem that impressive, but bear with me here. This photo was taken in 1915, near the corner of 68th Street and Fourth Avenue ( which is narrower than it is today. )

The thing that looks like a railcar is a piece of construction equipment that will be used in the building of the Bay Ridge section of the Fourth Avenue subway, which will open in 1915. Just past the third telegraph pole on the left hand size is a still under construction Bay Ridge High School.

A young boy and a dog are to be seen on the ( trolley? ) tracks running down the avenue.
Click the photo for much greater detail. 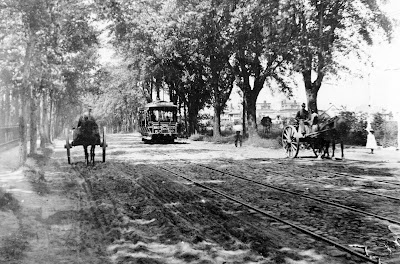 What looks like a lovely summer day in the 1890s, on Third Avenue and 75th Street. See two horse drawn carts and a trolley cart. Blow up the image and you can see " Brooklyn City RR Co." on the trolley.

Just love all those trees. Brings Paris or Berlin to mind. 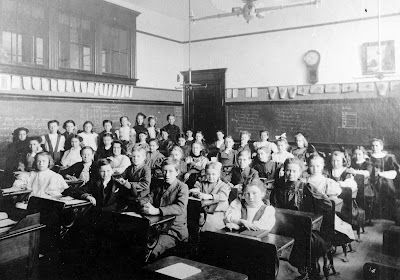 It's 10:30 in the morning in seventh grade class in PS 102. Photo taken in 1901. Boys are in jackets and ties and the girls are in dresses and big bows. Math on the blackboard to the left, penmanship on the one to the back? But what's that thing on the ceiling? 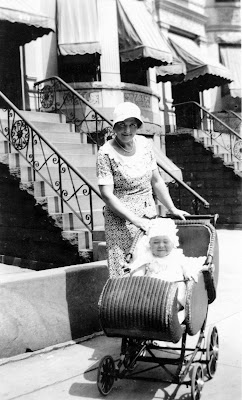 This photo was taken in 1932. That healthy baby you see is Marion , in her wicker pram, along with her mom Mary Alice, in front of their home on 77th Street, near Fourth Avenue. The book has another photo from today- of Marion Sinnott, in the doorway of the same house, where she still lives. How great is that?

The authors of Bay Ridge will be at a book signing at Barnes & Noble, 106 Court Street, Brooklyn, at 7pm on Monday January 19 ( Take R train to Borough Hall or take the Third Avenue ( B37 ) bus to Court and Livingston Streets. )

This is a fine little book, and anyone who loves Bay Ridge should get themselves a copy.

More pictures available here and on Left in Bay Ridge.


Photos printed with permission from Bay Ridge, by Peter Scarpa, Lawrence Stelter and the Bay Ridge Historical Society. Available from the publisher online at www.arcadiapublishing.com or by calling 888-313-2665.
---
I went past the site of the proposed new Key Food supermarket on 69th Street today. There is a new Electric Construction permit dated January 7. Hopefully, things are moving along. Behind schedule, but moving along.

Looks like a great book, love the Marion story. You must bring the book when you come out to NJ!

These photos are fantastic.

Years ago, my mother worked at the Lincoln Savings Bank on 5th Ave. (I think its Wamu now) and one year they gave away a calendar with old Brooklyn photos.

I thought it was a great idea and I really liked that calendar, but my mom said the bank got a lot of complaints because customers didn't like the black and white photos. Oh, well...

I remember those calendars.

And it will always be the " Lincoln Savings Bank " to me.

When a student at OLA, I had a Lincoln Savings Bank student account, where they collected small savings amounts from kids every week in yellow envelopes and IBM cards.

I live in Kansas, but grew up on 79th and 6th, in Bay Ridge. Is this new book available on Amazon? I doubt the Barnes and Noble out here will carry the book.

Thanks for the kind words. Wow, from Bay Ridge to Kansas, that's a big change alright!

Yes, the book is available on
amazon effective today.

The above link will take you right to it.

How about that picture of 3rd Ave. and 75th St. in the 1890's?!?! Unbelievably beautiful! The contrast is amazing between then and now...