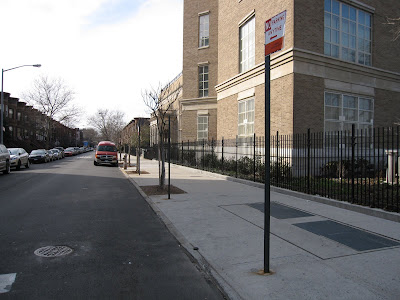 The construction at " High School of Telecommunications " ( Bay Ridge High School ) has was completed over a year ago.

But, still, the sign on the pole says that there is No Parking for reasons of temporary construction.

In a neighborhood starved for parking spaces, four perfectly good spots have been unavailable for one year, despite the fact that the construction has been completed..

If you walk one block over, you will see that the temporary classrooms that have desecrated Lief Erickson Park for more than ten years are still there. A once nice pocket park looks like Guantanemo Bay. 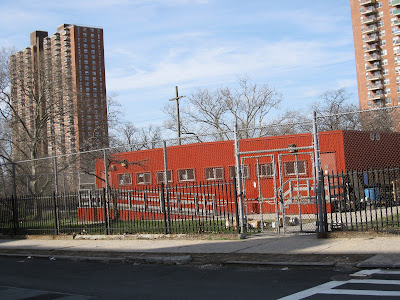 Why is this? Mayor Mike Bloomberg has complete control of both the streets and of the NY Board of Education. He is such a master of detail and leadership that he had to overturn the City's term limits laws so that we would not be deprived of his magnificence.

Since there is no possibility that these small and large things have not been done for reasons of incompetence, we may only conclude that this is being done as a slap to City Councilman Gentile and Senator Mary Golden.

I will expect the Bloomberg Administration to try to blame their poor performance on the bad economy. But the aforementioned construction was completed well before the economy tanked. And you'd think that removing this pigsty from Lief Ericson would take priority over any other parks construction in the city.

Mayor Mike, since times are tough, I will volunteer to remove the No Parking Sign from Senator Street for free once you give the word. I can have my ladder over there in ten minutes.

So, Mayor Mike, management genius, money is no excuse. Fix it, you incompetent schmuck.
Posted by The Phantom at 9:06 PM

We'd like to include some of your Bay Ridge shots in the video montage of photoblogger’s work, to be projected at the May 7th Blogfest event in Dumbo. This is a great way to share and see your work on a big scale, and the entry criteria is pretty simple.

Deadline for entries is April 12th.
DEADLINE EXTENDED TO 17th

I will try to send something but first I must learn how to do a zip file.

I am mixture of the early adapter and the adapt five years after everyone else has figured it out.

Is anyone besides myself sick of those Bloomberg TV Ads yet? I hear if he wins, he will be known as 4 tern Bloomberg. Is there anyone who can stop this man?