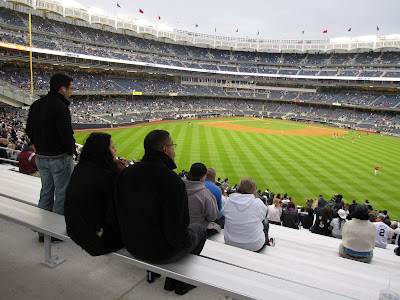 I went to the Angels-Yankees game this past Thursday. It was strange entering the new ballpark, with the magnificent old Yankee Stadium still there, on Death Row, right across 161st Street.

As with the new Mets Stadium, this stadium offers a slow and expensive wait for very poor food. Do not believe the hype. My brother in law went to the " Johnny Rockets " fast food place and had to wait a long time. The staff were told in the fourth innning to say that they didn't serve french fries, which is funny as it is a fundamental part of their, ahem, " menu". After 25 minutes at the counter, I think that they discovered that they did have fries after all. 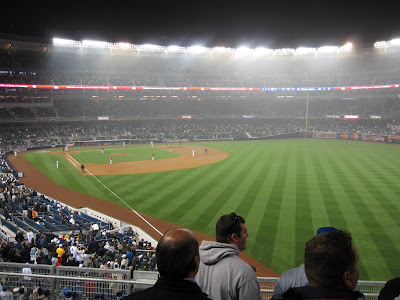 The new ballpark is interesting, but it has a lot of design flaws. There were lines at the mens rooms, which may help curtail beer sales. There are many severely obstructed bleacher seats.

It's mostly good, but is it Yankee Stadium? After so many days and nights, I don't know. Is the new place real or fake, an improvement over the House That Ruth Built or a formula new stadium by HOK Sport for the suits, with a fake facade slapped on the roof?

As fog rolled in, some memories of the old 1973 and before true Yankee Stadium came to mind.

why was i blessed wit this musical talent?

When are they going to fix that hole where that shirt came out of?

In light of the recent rain out debacle, $9 beer, a mediocre product on the field and security that prevents the average fan from moving from one section to another, the "new" Yankee Stadium is definitely fake.