I did a little free association search on youtube yesterday, and came up with this little gem. It's as though every word and every note of this Beatles song was made with " The Wizard of Oz " in mind! 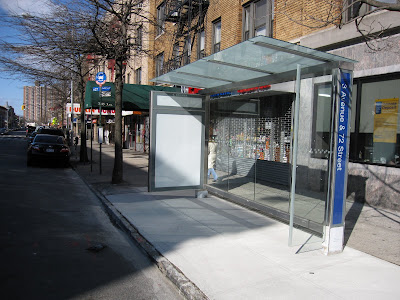 The B-37 ( Third Avenue ) has served the Bay Ridge to Downtown Brooklyn communties since 1942. And before then, trolley cars ran the same route.

This important route, a lifeline for our many seniors and others, is slated for elimination unless the MTA finds a lot more money. The politicians claim to be concerned, and perhaps something will be done.

So what is the MTA spending it's money on these days? A couple of weeks ago, they built this fancy shelter at 72nd / Third. Others have been built elsewhere on Third Avenue. For a route that supposedly won't be here soon.

Either someone's bullshitting somebody, or these people cannot be trusted with money.

On the bright side, saw five construction guys clearing debris from the projected new Key Food site on 69th Street. I'd noticed a bunch of fresh permits there the weekend before. Think we'll have our much needed supermarket before too long now.

I treated myself to a lithograph, and it ( along with something they gave me when I left the Navy base in Naples Italy ) needed to be framed. I went to Polizzi Fine Art on 7813 Third Avenue yesterday. The husband and wife team there gave me some good ideas, and I'll have my custom framed works in a week or two. These guys appear really good, and the prices were fair. Can't wait to see the final result.
Posted by The Phantom at 1:48 PM

The MTA does not build those bus shelters. They are 100% built by Cemusa at no cost to the MTA, as Cemusa gains from the ad revenue on them.

But what would have happened to the Cemusa - MTA - NY deal if they built these expensive shelters only to have the MTA stop the bus routes in those areas?

Cemusa would be pretty upset with the MTA!

Phantom said: "But what would have happened to the Cemusa - MTA - NY deal if they built these expensive shelters only to have the MTA stop the bus routes in those areas?"

Cemusa would still have street signage, and revenue therefrom.
It's not as if the shelters will go unseen or unused just because buses don't stop thre.