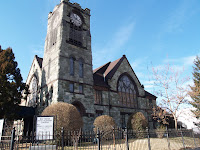 In a public forum, Pastor Robert Emerick stated that he had no interest in growing his congregation. That’s the bottom line. If the Bay Ridge United Methodist Church truly cared, then they would be jumping all over opportunities to grow their congregation, and by doing so they would generate enough income through memberships, additional donations or other programs, to not only fund the work of their mission but also enough to repair, restore and improve their magnificent church building.

By failing to act to grow their congregation, they have managed to allow their membership to dwindle to such low levels, that they see no options other than tearing down all the buildings on their very large plot of ground, selling most of it for the building of new condos and holding on to only a very small plot for a new smaller church – accepting as permanent the downsizing of their congregation.

Their neighbor right across the street, the Bethlehem Lutheran Church, advertises in the local papers with a slogan “Active and Growing for more than 100 years.” That church, one of dozens of Lutheran churches in the area has an amazingly active and vibrant congregation. Through an interesting real estate deal several years ago they sold an adjacent building they owned, part of which has become a public intermediate school, and generated plenty of cash to further their mission while maintaining their building.

Other religious institutions in Brooklyn and throughout the city have sold off part of their land, allowing residential buildings to be built behind or next to their church buildings, generating enough cash to fund their missions and repair and restore their churches.

St. Bartholomew’s Church on Park Avenue in Manhattan tried to build a skyscraper over its landmarked parish house but was stopped by the city’s Landmark Preservation Commission. Rather than despair, they established an innovative approach to congregation building, founded an active theater, opened a sidewalk café/restaurant and used advertising to grow their congregation. They have become so successful that they now offer seminars teaching others how to ‘think outside the box’ – providing results that include growing a congregation, supporting one’s mission and innovative ways to preserve facilities and buildings.

At a meeting that we attended with the trustees and the pastor of the Bay Ridge United Methodist Church we suggested that they attend such a seminar. Pastor Emerick immediately responded, “WE DON’T WANT TO GROW OUR CONGREGATION!”

We find it incredible and disingenuous that any pastor of any congregation of any denomination would feel this way. It makes us feel that it is only about the money, and despite their claims that it was a hard decision to make because they say they truly love their home, they must be blinded by the reported $9.75 million dollars generated by the sale. This must be the reason that the trustees and pastor rejected a plan offered by Con Edison and arranged by Council Member Vincent Gentile. That plan would have generated between $300,000 and $350,000 annually, built much-needed senior housing and would have kept the church building intact.

Destruction is not the only answer, but it seems that the big payout is preventing them from considering any other options.