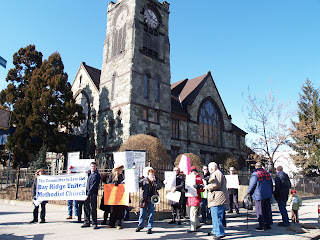 While Bay Ridge's politicians slept in their beds, a small, intrepid band assembled in front of Bay Ridge Methodist Church on Fourth and Ovington Avenues this morning. A slideshow of the event can be found here

The die may be cast, thirty pieces of silver may be about to change hands, but a few who came out on a chilly morning to demand that this lovely 109 year old building be saved.

The pastor of the congregation apparently has signed a contract with a reputed slumlord who wants to replace the building with "luxury condos".

Apparently, 362 Ovington, the first limestone house on the street, is to be demolished as part of this project. This does not make the owners of 360 Ovington too happy, as that building shares a common wall with 362 Ovington.

A man in the crowd was overheard saying "This is post modern bullshit. This is not Christianity".

I ran into a few of the other Bay Ridge bloggers there. We had a two minute summit conference before I had to run off. 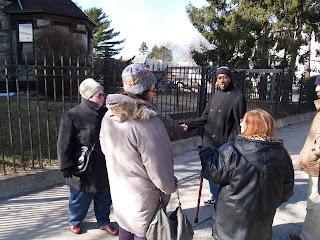 A man encountered the demonstrators and asked what was going on. Upon hearing that it was to protest the pending demolition of the Bay Ridge Methodist Church, he recoiled, saying " No, they can't do that. This building is a landmark!"
Posted by The Phantom at 4:05 PM

Bring back the Bay Ridge Farms.