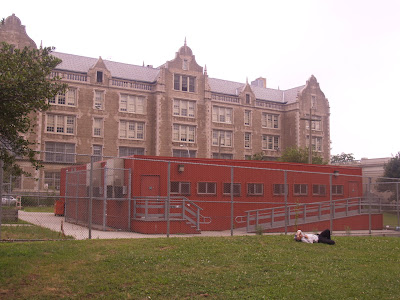 For the nearly 40 years I've known it, Bay Ridge High School ( now " High School of Telecommunications" ) has been an alien presence in the neighborhood. I knew of no local residents who attended school there, none who worked there. I never heard of any " open houses " or the like when the school ever invited the locals to come in. Blocks of parking spaces on 67th Street were reserved for the school staff. No locals need apply. The school never reached out, never tried to be friendly.

Students from the school sat on the stoops nearby, and didn't like it too much when they were asked to move. It's not as bad as it was some years ago, but you still see loitering "students" cutting class. smoking reefer, on 68th Street, Senator, all the nearby blocks.

Ten years ago, Bay Ridge High School took outdid themselves by commandeering a swath of Leif Eriscon Park that runs between Fourth and Third Avenues. They built temporary classrooms in the park, closed off the Fourth Avenue entrance, and told the locals to stay the hell out.

A major addition to the school has been completed for some time. They don't even need the temporary classroom anymore. But the principal and the Education Department didn't lift a finger to remove the festering sore from the neighborhood. They kept playing pocket pool between coffee breaks and were evidently planning on leaving the trailers in the park for another decade or two. 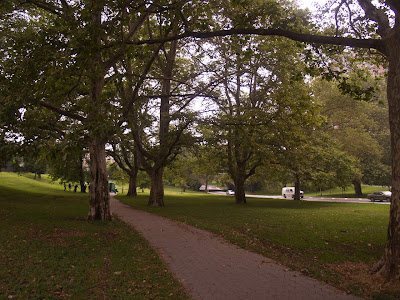 This was a lovely small park at one time. If you see the stretch near Third Avenue, you can see how the entire park could be pretty once more. But first the hostile and unwelcome Education Dept building must leave.


The NY Daily News, which covers Bay Ridge and Brooklyn better than the Post and the Times combined, covered this story 12 days ago. Only because of their persistent questioning, the sluggards, deadbeats and do-nothings of the NY City Education will move the trailers. One of these years.

It is also noted that the City still has "no parking" signs on Senator blocking three parking spots, even though construction of the Bay Ridge High School (or whatever they're calling it today ) annex has long been completed. 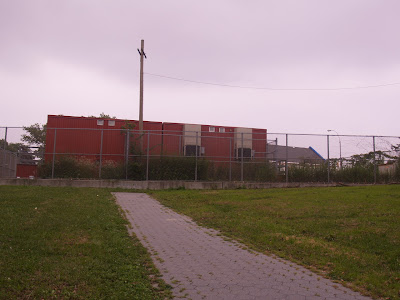 You can enter the park on the Third Avenue side. But if you walk up the path, this is what you run into. Shame on the City and on all of our elected officials for allowing this state of affairs to exist for even one day.

Today, on a Sunday, the air conditioning was going full blast in this empty building. I'm sure it was going strong all weekend.

This school is a blight on the whole community, Fort Hamilton is a close second.

It's our version of Park Slope's John Jay.

I use to shoot fireworks off on the 4th of July where that building is now. The worst part of that was when, the people from the BR Towers were shooting at us. I miss those days when the A&P was on Senator n 4th, when there was a bar on almost every corner, ah yeah the good ole days

what the hell are you talking about? What are you, drunk?

A blight on the whole community? A version of John Jay? Stop talking about what you know nothing about. You're complaining about a few construction trailers on a strip of grass in the middle of the highway? You've got to be kidding! I am sure you are planning on spending three hours there every Sunday afternoon after the trailers are removed. What's the matter, too many drug dealers in the park on senator & 5th?

There isn't a lot of parkland in Bay Ridge east of Shore Road, and this is part of the little that we do have.

Its not a strip of grass in the highway, it's our park. And Bay Ridge High School had no right to scar it with a trailer for more than a decade.

Yes, a small park area is still being used by HSTAT. But, there's a lot of parkland within a ten block radius. Go to Leaf Ericson and much larger "green" areas nearby. It is a tiny area after all.

The fact of the matter is that the school is actually one of the best public high schools in the borough. It's providing a valuable service to the community. Want proof?

"HSTAT received a coveted grade of 'A' from the Chancellor on this year's Progress report. Possible grades ranged from A to F and there were comparatively few schools accorded this highest honor. HSTAT was also judged by outside agencies hired to conduct a Quality Review n and here again scored a grade of 'Outstanding,' the highest possible achievement. More information and ratings can be found in the book, The Best Public High Schools in New York City."

That's from the HSTAT homepage. If you don't believe it, look at this:

And yes, I graduated from this school recently. I'm not going to let you people insult it for no reason other than the fact that you hate teens these days that "smoke dope" and "listen to their rap music." Not all teenagers are rebellious hooligans!

Some of you need to do some reading and get better informed. Then, maybe you'll be able to coherently form a logical argument.

Or, you can just post on a blog about an issue that SHOULD be a non-issue.

A small grassy area used for teaching our kids? SOMEBODY CALL GREENPEACE ALREADY!

Welcome to the Bay Ridge Blog

Please give me your address so that I can park an ugly trailer right in front of it.

The one block area that is disfigured by this trailer is the nicest part of Lief Ericson Park. I'd like to see someone put a trailer like that in Prospect Park. The locals would burn it down

I have seen Bay Ridge High School students hanging out on the stoops of 68th St, Senator, and 67th St many times over the last 25 years. It has been a constant problem. The students and faculty have never respected the neighborhood.