Victoria Hofmo in the NY Times 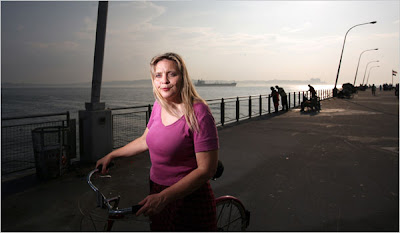 Vickie Hofmo, local preservationist and activist is the subject of an article in the "City" section of today's NY Times.

I've known her for years, and was unaware that she has founded a museum, for Christ's sake. It's the Scandinavian East Coast Museum, which documents the long, rich history of the Vikings and Viqueens in Brooklyn and elsewhere on the US East Coast.

"There’s this thing in Scandinavian culture called janteloven. It means that you’re not better than anyone else. “We don’t brag. We’re humble. I think it’s part of the reason Scandinavians haven’t been documented so well. When I first started going around collecting things, people would say, “Is my stuff good enough?” I’m like, “All the stuff is a story, and of course your story is important.” I can toot their horn because I don’t have that same sense. I think it’s O.K. to be proud."

Who is this Victoria Hofmo and what does she do? Does anyone know her?

I have never heard of her, but I am not a fan of the NY Times anyway.

But in any case, she has done a very good thing, that we don't hear enough about these days.

They've made arrests in the Paul Quinn murder, 3 in the ROI and 3 in NI.
Joint operation, dawn raids

Lets see what this means...

I'd marry Hofmo, if she not already married!!!!