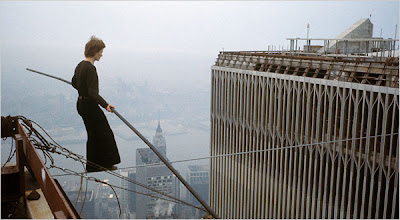 On August 4, 1974, Philippe Petit walked on a high wire strung between the towers of the World Trade Center. It was an act of such genius and beauty that words will never describe it.

Now, there is Man on A Wire a documentary about the crime of the century.

Its showing in Manhattan and in some other places, and I intend to see it very soon. I've thought about this incident so often over the past seven years, wondering why noone made a movie of it. Now, someone has.

How come he NEVER walked across the Bay Ridge Towers?

I think there's a waiting list for that, too.

Oddly enough, watching that small clip made me laugh and cry.

I want to see the movie.