"The Black Donnellys" in Bay Ridge 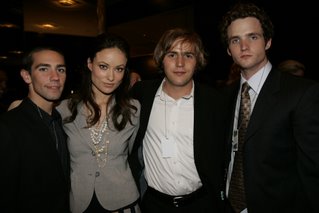 The site says "The Black Donnellys follows the exploits of four young, working-class Irish brothers. Their involvement in organized crime in New York City will put their life at risk and they will do anything to protect each other from the hostility between them and the others New York families who want their territory".

Apparently, any cars parked in the filming zone will be towed away--but will not be sent to the pound. They'll be re-parked in a free parking spot outside the zone. You can call the City and find out where it is. But where the hell are they going to find available spots in parking-deprived Bay Ridge?

This show will ultimately be in the same time slot held by ER
Posted by The Phantom at 9:58 PM

Wonderin' when you'd mention this. Although, they reduced the filmin' zone by a couple blocks, particularly they took down 69th's signs. They're also gonna film inside Nick's, bought 'em out fer the day.

Are they not filming on 68th Street?

You mean I parked out of position for no reason ?

Yup, that Nicks. And yeah, I saw some cones on one side on my way home from work, so I'm guessin' they're filmin' there. 69th was abandoned.

when they were shooting here in suburban Rochester, NY.