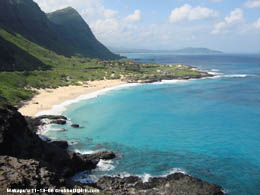 I first visited Hawaii, if you call it a visit, when I was in the Navy. I caught a flight one January from Travis Air Force Base, near San Fran, to Guam. We had a two hour stopover in Honolulu. Though it was just a brief stop in an airport, the glimpse of the palm trees, and feeling the tropical breezes from the outdoor central area was enough to make me decide that I had to return.

I returned a year later, and I've returned many times since. I have a number of favorite places in the world, and Hawaii, even the very overbuilt Honolulu is definitely on that list.

Hawaii has an interesting music scene. The Spanish and Mexican cowboys brought in to work the ranches in the 1800s brought the guitar, which remains the foundation of Hawaiian music.
Hawaiian slack key guitar music is as accomplished as you'll hear anywhere.

Floating in from Jamaica decades ago came reggae, which metamporphized into "Jahwaiian" music, which has its following, esp among the politically minded.

Though few speak Hawaiian, you'll hear many songs in the Hawaiian language.

Much of Hawaiian music is as awful as anywhere, but some of it is wonderful. There's a distinct sound, even when someone's doing a cover of something that was on the top 40 five years ago.

I've linked to IRH Live Hawaiian Music. Click on this link, and you can soon be hearing the sweet sounds from the far away islands. Good to hear anytime, esp when it gets cold.

Don't blame me if you fall in love. Make a donation to this excellent, commercial free site if you care to.