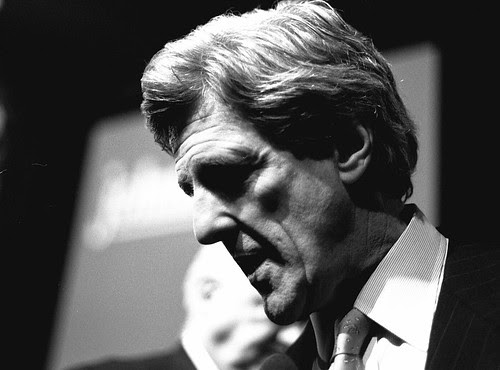 Always, there was something that seemed inauthentic about John Kerry.

He loved his "band of brothers" but left them in the field, then libeled them in the halls of Congress.

He's the friend of the working man, who became a man of wealth and patrician airs the old-fashioned way- he married a dead millionaire's widow.

Now, after leading the Democratic Party to defeat in the 2004 Presidential Election, he may have just derailed the Democrats' victory train in the 2006 House/Senate elections. Until days ago, it seemed as though they might take control of both houses.

A couple of days ago, at a California rally, Kerry said "Education, if you make the most of it, you study hard, you do your homework and you make an effort to be smart, you can do well. If you don't, you get stuck in Iraq."

He claims that he botched a joke about President Bush, but I question this. As Britain's Telegraph says, "Kerry has long had a reputation as a haughty Boston Brahmin, a privileged, elitist, condescending careerist who cannot relate to ordinary Americans."

Could you see him looking down on our troops in Iraq? I could, easily. I think that he looks down on everybody. This was a slip of the lip, that revealed a bit of the man's soul. And he isn't the only Democrat to look down on the military and on the men and women who serve in it.

But I look up to John Kerry, at least for now. Because he may have thrown a case full of monkey wrenches into the engine of the Democratic Victory Train. And Howard Dean and the rest are hardly the ones to fix it.

This could be a very interesting Election Day. See you at the polls.

He truly demonstrated why, sad as it is to say, we are better off that Bush won the election.

Just like the media, you conveniently (and dishonestly) left off the last bit of his "joke" which was "just ask President Bush." He was very clearly referring to Bush and not the troops with the (admittedly poorly executed) joke. By taking his statement out of context and leaving the inflamatory part without the "punchline", (in other words, editing it) you're essentially telling a lie with this post. (Though nowhere near as big a lie as any of the hundreds told by Bush, Cheney, Rumsfeld, Rice, Rove, Hastert and the rest of those pigs). If this does have an effect on the election, it will only be because of the utter dishonest portrayal of Kerry's statement...in otherwords, only because of more weak, trashy republican lies.

You're doing a disservice to your readers, the troops and America in general by propigating this talking points bullshit in the face of the truth.

I wish I could believe what you say but I simply do not.

This guy has had hatred for the military and those in it since at least 1971, when he testified to the Congress about the military:
"They told the stories at times they had personally raped, cut off ears, cut off heads, taped wires from portable telephones to human genitals and turned up the power, cut off limbs, blown up bodies, randomly shot at civilians, razed villages in fashion reminiscent of Genghis Khan, shot cattle and dogs for fun, poisoned food stocks, and generally ravaged the countryside of South Vietnam in addition to the normal ravage of war"

Later asked to document these awful charges in some way, he could not.

There are many other quotes throughout the years that could be shared--that to me indicates that what he said the other day is completely consistent with his lifelong view.

And I think that many from the Democratic side tend to look down on the military as uneducated dupes who aren't as smart as they are. Which is demonstrably untrue.

Sorry, bro. I won't call you dishonest for disagreeing with me!

Kerry is a buffoon. Either he was defaming the troops - and I honestly don't think he meant to - or he was trying to imply that the President is DUMB. All he managed to do was to convince everyone - his party and the other - that he's stupid.

Guarantee you one thing--the Democratic Party is enraged at him, and they will not forget.

Kerry has long since been exposed as out of touch and having a sense of humor equal to a hatrack. I have no love for Bush either but Kerry clearly showed why he is headed to the political graveyard or the political sunset if Mr. Parker will not be offended by my partial use of his handle.