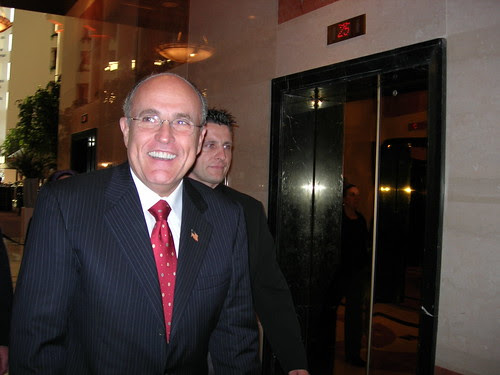 And that's just Bay Ridge, which did not have a bad crime problem to begin with. Similar improvements have happened all over the city. Hundreds of people are alive today because of the changes that he implemented.

The other thing most of us remember Rudy for is his leadership of a deeply wounded New York City after the September 11 attacks. Unlike the crime drop, this can't be quantified. Crimefighting showed Rudy's tough side, but on September 11 and afterward we saw a toughness coupled with a real gentleness. He said that he didn't expect attacks against the city's large Arab minority because "he knew New Yorkers would never do anything like that".

He became the face of a defiant and very proud city. Most of the credit for New York's survival and recovery rightfully go to its citizens, but the fact is that we had a strong, tireless leader during terrible days.

Rudy's not perfect. But he's by far the best potential candidate out there. And unlike the current President, Rudy can actually speak.

Giuliani's leadership places him in a position that is most unusual- he is beloved by many Democrats and liberals, as well as Republicans and conservatives. The normal labels don't apply. If nominated, he carries 45 states. You heard it here.

Come on over to ATW and join the Rudy for Prez discussion.

I saw him a few weeks ago, when he came to Greenville, South Carolina, to speak on behalf of the Republican Party. He's a smart gentleman. I'd vote for him. :)

He'll never get your party's nomination. He's not conservative enough. You guys just lost big time and the reason according to many in your party was that Republicans have not been conservative enough. He may seem interesting now but when or if he's a serious candidate and he has to start answering questions in places like Iowa, they'll inevitably start leaning to somebody like McCain. He could run as an independent but then he'll just split the vote with the Rep. nominee and give a victory to the Dems. His best hope is a VP nod.